A popular North East curry house has donated more than 100 luxury Indian meals to the homeless community across North Tyneside.

The food, which was enjoyed by hundreds of homeless people was hand-delivered by restaurant owner Azad Miah and multi-award winning chef and co-owner Shohid Ahmed with the aim of spreading a little happiness for those affected by the ongoing coronavirus pandemic. 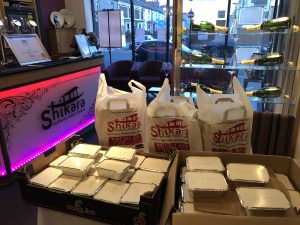 “We want to pay tribute to our local communities at this very difficult time,” says Azad. “Even though we’ve closed our restaurant, we wanted to make sure that no food went to waste, and what better people to share it with than with those suffering with homelessness on our local streets.”

With its ambitious menu and striking architecture, since 2012 Shikara has offered coast-bound curry lovers a true taste of Punjab, North Indian, South Indian and Bangladeshi food, by serving up the highest calibre of contemporary Indian cuisine in a striking two storey, sea-view restaurant. 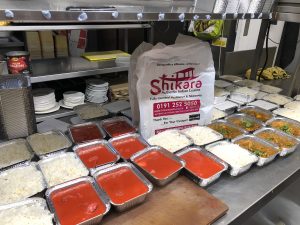 The restaurant – which counts the likes of Newcastle United stars Sean and Matty Longstaff among its many fans – has won numerous regional and national awards over the past eight years including scooping the prestigious ‘restaurant of the year’ at the English Curry Awards in 2018 and is a regular winner of North Tyneside Council’s annual Whitley Bay Town Cup which celebrates the best of local business.